Israeli Soldiers Injure And Kidnap A Palestinian Child Near Ramallah 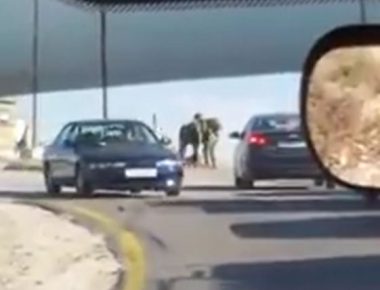 Israeli soldiers shot and injured, on Thursday morning, a Palestinian child from near ‘Atara military roadblock, between Birzeit and Atara towns, north of the central West Bank city of Ramallah. The soldiers were filmed dragging the wounded child instead of dealing with his injury.

The child was later identified as Anas Mahmoud Zeid, 15.

Eyewitnesses said clashes took place near the military roadblock, and that the army fired several live rounds, rubber-coated steel bullets and gas bombs, at local youngsters who hurled stones at them.

The clashes started after the soldiers stopped and harassed many schoolchildren, and dozens of residents, peacefully marching in commemoration of the twelfth anniversary of the death of Palestinian President Yasser Arafat.

The soldiers fired gas bombs, concussion grenades, rubber-coated steel bullets and live rounds, wounding one child with a live round in the thigh, before the soldiers detained him and took him to an unknown destination.

Dozens of residents suffered the effects of teargas inhalation, and a few were shot with rubber-coated steel bullets.

A smartphone video filmed by a car passenger from a distance showed two soldiers dragging the wounded child, instead of providing him with the needed medical aid.

The soldiers also prevented Palestinian medics from approaching the child to provide him with the needed treatment, and move him to a hospital.