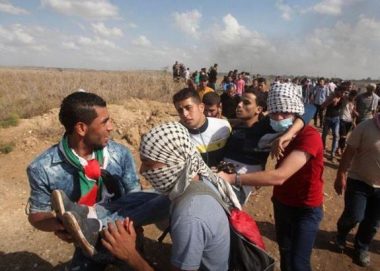 On Friday, Israeli soldiers, stationed across the border fence, attacked protesters in several parts of the besieged Gaza Strip, wounding at least five Palestinians, and causing many others to suffer the effects of teargas inhalation.

Media sources said many Palestinians marched near the al-Boreij refugee camp, in central Gaza Strip, and in Jabalia, in the northern part of the coastal region, before Israeli soldiers, stationed on military towers, and in tanks across the border fence, fired many live rounds and gas bombs at them.

They added that the soldiers shot two young men with live rounds in their legs, inflicting moderate wounds, in addition to firing many gas bombs, causing many Palestinians to suffer the effects of teargas inhalation.

Clashes also took place near Nahal Oz military base, across the border fence east of Gaza City, and near the Shuhada Graveyard, east of Jabalia in the northern part of the coastal region.

The army shot and injured three Palestinians, and caused many others to suffer the effects of teargas inhalation, medical sources said.