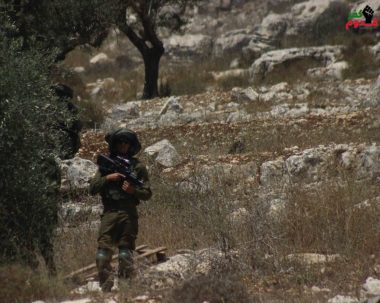 Israeli soldiers shot, Friday, one Palestinian with a rubber-coated steel bullet, and caused dozens to suffer the effects of teargas inhalation, after the army attacked the weekly nonviolent procession against the Annexation Wall and colonies in Kufur Qaddoum town, east of the northern West Bank city of Qalqilia.

The Palestinians, accompanied by Israeli and international peace activists, marched against the wall and colonies, and denouncing both the Israeli and American hostile policies towards the Palestinians and their legitimate rights in occupied Palestine.

They also marched demanding the military to reopen the main road, which was blockaded fifteen years ago, to enable easy access for colonialist settlers driving to and from the illegal Kedumim colony, which was built on private Palestinian lands.

The Coordinator of the Popular Committee in Kufur Qaddoum, Morad Eshteiwi, said a large military force attacked the nonviolent protesters, even before they started marching towards Palestinian lands, and fired rubber-coated steel bullets, gas bombs and concussion grenades at them.

He added that a young man was shot with a rubber-coated steel bullet in his arm, while dozens, including Fateh Revolutionary Council member Bayan Tabeeb, suffered the effects of teargas inhalation.

Eshteiwi also said that the soldiers fired gas bombs and concussion grenades at a number of homes, and attempted to abduct several Palestinians after ambushing them.