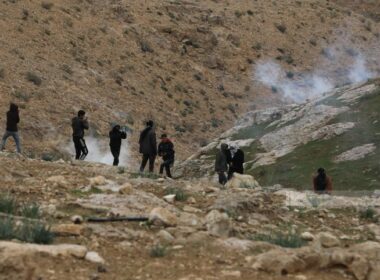 On Saturday, Israeli soldiers injured many Palestinians protesting the illegal colonialist takeover of their lands in the Zweidin area in Masafer Yatta, south of Hebron city, in the southern part of the occupied West Bank.

Media sources said the nonviolent protesters were marching on Palestinian lands before Israeli soldiers fired a barrage of gas bombs and concussion grenades at them, causing many injuries.

They added that the soldiers also installed roadblocks to prevent the Palestinians from entering the area and detained WAFA cameraman Mashou Al-Wihwah for several hours.

The Palestinians in the Zweidin area, which includes the communities of Arab As-Saray’a, An-Najada, Al-Hathalin, and Ad-Deerat, continue their struggle against the seriously escalating Israeli violations, including the attempts to displace them for the benefit in illegal construction and expansion of the Israeli colonies, in violation of International Law.