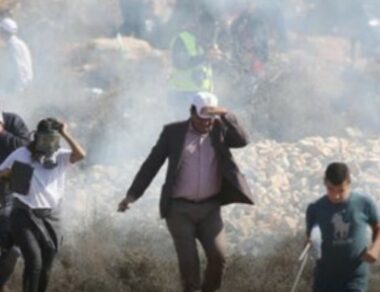 On Tuesday, Israeli soldiers injured several Palestinians near Nablus in the northern part of the occupied West Bank after the residents tried to enter their illegally confiscated lands.

Media sources said the Palestinians from Qusra, south of Nablus, tried to enter their lands illegally confiscated by the occupation army a few months ago.

They added that the soldiers fired gas bombs and concussion grenades at the residents, causing many to suffer the effects of tear gas inhalation.

The illegally confiscated Palestinian lands, approximately 300 Dunams planted with olive and almond trees, were largely uprooted as part of the ongoing expansion of the illegal Migdalim colony.

The occupation authorities are also preparing to pave roads leading to the colony and started installing electricity poles on the stolen Palestinian lands.