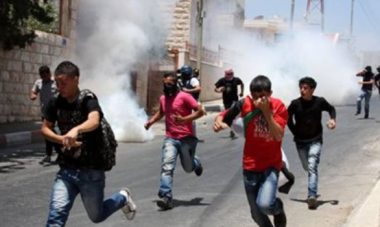 Media sources in Jerusalem said many army jeeps invaded Anata, and Abu Dis, and resorted to the excessive use of force against Palestinians, who were marching against the illegal U.S. recognition of occupied Jerusalem as the unified capital of Israel.

They added that the soldiers fired many rubber-coated steel bullets and gas bombs, causing many Palestinians to suffer the effects of teargas inhalation.

Furthermore, dozens of soldiers, and Border Guard officers, were deployed in and around the two towns, and closed Hizma military roadblock, preventing the Palestinians from crossing, and forcing them to take alternate, longer and unpaved roads.