Army Invades Many Neighborhoods In Jerusalem 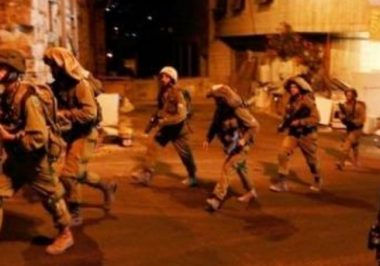 Israeli soldiers invaded, on Saturday at night, many neighborhoods in occupied East Jerusalem, and opened fire at protesters, in addition to attacking Palestinians holding social activities, celebrating the holy Muslim month of Ramadan.

Media sources in Jerusalem said the soldiers invaded several neighborhoods in the occupied city, and fired gas bombs and concussion grenades at Palestinians, who protested the invasion.

The soldiers also imposed much harsher restrictions on the Palestinians in the city, while Israelis celebrate Shavuot Jewish holiday.

In addition, the soldiers attacked dozens of Palestinians holding social and religious activities, celebrating the holy month of Ramadan, in Bab al-‘Amoud and Bas as-Sahera of the Old City.

The Palestinians were attacked by soldiers and mounted officers, who invaded the two areas, and resorted to the excessive use of force against them.

In addition, the soldiers invaded the many neighborhoods in Silwan town, south of the Al-Aqsa Mosque in the occupied city, and attacked Palestinian protesters.

The soldiers also invaded Hizma and al-‘Isawiya towns, and fired gas bombs and concussion grenades at many Palestinians, who protested the invasion.

It is worth mentioning that the soldiers also briefly invaded the al-Makassed Hospital, in at-Tour neighborhood overlooking the Old City.