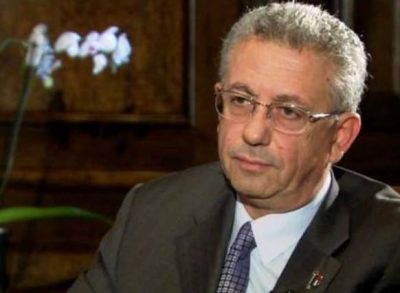 As part of massive Wednesday dawn invasions and breaking into homes, media centers and buildings, Israeli soldiers also invaded the office of Palestinian Legislator and the head of the Palestinian National Initiative, Dr. Mustafa Barghouthi.

The soldiers broke into Dr. Barghouthi’s office, in Ramallah, amidst massive and violent invasions into dozens of homes, offices and media centers in different parts of the occupied West Bank, leading to excessive property damage, and many abductions.

Dr. Saeb Erekat, a member of the Executive Committee of the Palestine Liberation Organization (PLO), strongly condemned the invasions and violations, that resulted in abducting, and wounding, dozens of Palestinians.

Dr. Erekat added that the invasion into the office of Dr. Barghouthi, a democratically-elected legislator, is a serious and direct violation of International Law, international treaties, and all signed agreements between Israel and the PLO.

“This is a violent, cowardice attack, it is a calculated Israeli escalation and aggression, meant to create further violence and tension,” Dr. Erekat said, “The invasion into the Health, Development, Information and Policy Institute” (HDIP), the detonation of its walls, doors and windows, and the illegal confiscating of computers and equipment, is a direct Israeli political message to the International Community defying all international laws with impunity. Israel is targeting our people, our elected officials, our lands, holy sites, media and health centers…”

Dr. Erekat added that the Israeli army carried out more than twenty-two invasions into the occupied territories in less than twenty-four hours.

“This Israeli hysteria and the deliberate targeting of representatives and elected figures, the escalating invasions and violations, will just lead to further tension and violence,” he said, “The International Community is required to act and provide the urgently-needed protection to the Palestinian people, living under this illegal occupation and constant violations.”