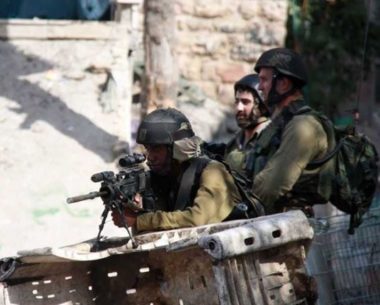 Israeli soldiers shot, Wednesday, a young Palestinian man at a gate of the illegal Annexation Wall, in Qaffin town, north of Tulkarem, in the northern part of the occupied West Bank.

Media sources said the soldiers shot Ala’ Bassam Abu Bakr, 24, with a live round in his left leg, causing a moderate injury.

The sources added that the young man was rushed by a Palestinian ambulance to Thabet Thabet hospital, in Tulkarem.

It is worth mentioning that, on Tuesday, the soldiers shot five Palestinians from several villages and towns in Tulkarem, while trying to cross a gate of the Annexation Wall in Nazlet Issa nearby area.