Israeli Soldiers Shut Down Radio And TV Stations In Hebron 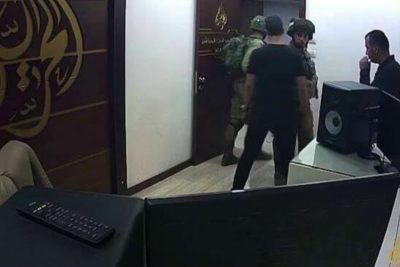 Israeli soldiers invaded, on Thursday at dawn, the southern West Bank city of Hebron, before storming into al-Hureyia radio and media network, in addition to the Nawras TV, violently searched them, causing excessive damage, and shut them down for six months.

The army ordered the media network shut for six months, until February 14, 2018, after ransacking and violently searching it, causing serious damage.

Ayman al-Qawasmi, the executive head of the al-Hureyia Media Network, stated that this was the fourth consecutive time the army shuts it down, and added that Israel is trying to silence the media and the pretext of “harassment.”

He added that 56 families earn their livelihood through this station, and voiced a message to President Mahmoud Abbas, Prime Minister Rami al-Hamdallah, stating:

“This is happening in front of you, my message to President Mahmoud Abbas, Prime Minister, Rami al-Hamdallah, Hebron Governor Kamel Hmeid, and other officials, is to submit their resignations, and stay at home, because they are unable to protect the media in Palestine.”

“If the head of the Journalists Syndicate, the Prime Minister, the President, and the governor of Hebron cannot protect us; they need to resign,” he stated, “this media network is in an area that is under the complete control of the Palestinian Authority, yet; they remain silent, and cannot protect is. We have nothing to do with incitement; we try to deliver the message of the simple people in need to the officials. We try to be the voice of the voiceless, and that is why we keep getting attack and harassed.”

“We are not surprised by his savage behavior of the Israeli army, and its collaborators; they want to silence us; they are all conspiring against us,” he said, “If helping the people and aiding them is considered incitement, then we are proud of it. Our main role is to deliver the message and appeals of the ordinary people to the officials. As for incitement, let them show us one instance of incitement; all our programming is archived, and we have nothing to hide.”