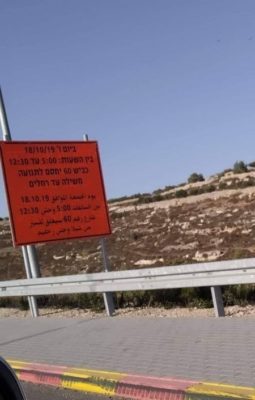 According to local sources, Israeli forces abducted the editor Fuad Aghbarieh, as well as the civilian Marwan Hashash, after storming the city of Jenin and raiding their homes while they were asleep in their beds.

In addition to abducting Fuad from his home, they ordered the journalist to hand over his son Majdi within 74 hours.

The abductions came after the soldiers wreaked havoc and shattered the doors of the houses amid the firing of sound bombs inside.

Earlier that night, Israeli forces raided a wedding party in the town of Sur Baher, southeast of occupied Jerusalem.

Local sources told the Palestinian Wafa News Agency that the Israeli occupation forces stormed the ceremony, and deliberately terrorized the participants, amid skirmishes with the residents.

The Israeli army announced Thursday that the closure would continue from five in the morning until 12:30 pm, in order to allow a marathon run by illegal Israeli settlers from the junction of the village of Turmus’aya to the junction of Zaatara village.

According to the Wafa correspondent that the occupation forces closed the main entrance of Salfit (in the northern West Bank) and prevented citizens from using the main roads to secure the marathon settlers.