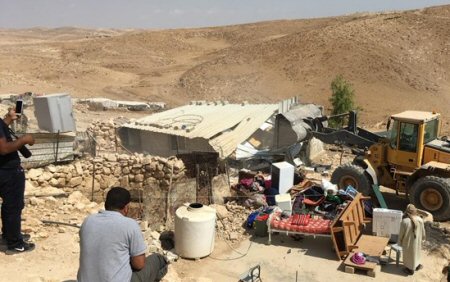 Israeli troops reportedly devastated, early on Monday, a Palestinian-owned facility and caravan in the Sebastia neighborhood, northwest of the West Bank city of Nablus.

Ghassan Daghlas, chief of Israeli settlements construction file in the northern West Bank, told media outlets that an Israeli army force invaded the Sebastia neighborhood, and began knocking down a mobile caravan, owned by local resident, Mosheer Seif, under the pretext that it was placed without permission from Israeli authorities.

One month ago, Israeli troops destroyed a similar caravan and the same agriculture facility in the same area.

These measures are ordered by the Israeli occupation’s so-called ‘civil administration’, across the occupied West Bank, especially in areas that are classified as Area C.

According to the Oslo peace accords of 1993, signed between Israel and Palestine Liberation Organization, Area C is the area of the West Bank under full Israeli military and administrative control.