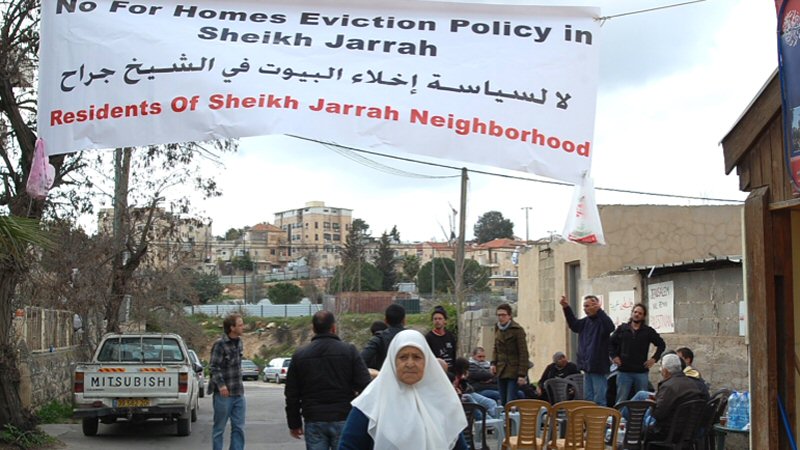 At least 75 Palestinian families live under threat of eviction in the East Jerusalem neighborhood.

The eviction notice states that Israeli forces may evict 77-year-old Kneibi and her family anytime between May 13 and May 27, 2018. The pretext for Kneibi’s eviction is a suit filed by six Israelis who claim their families owned the home before 1948.

Israeli forces expelled over 750,000 Palestinians during the creation of the Israeli state in 1948, a time known to Palestinians as the Nakba, meaning “catastrophe.”

The 1970 Legal and Administrative Matters Law empowers Jews to reclaim property in East Jerusalem lost before 1948, even if they have already been compensated by the Israeli government for that loss. The Absentee Property Law of 1950 bars Palestinians from filing similar claims.

According to Peace Now, approximately 75 Palestinian families live under threat of eviction by the Jerusalem municipality – evictions carried out for the explicit purpose of opening the home to Israeli settlers. The municipality suspended evictions from Sheikh Jarrah for eight years, until the displacement of the Shamasneh family in 2017 and now the impending displacement of Kneibi.

The timing of the Kneibi family’s eviction overlaps with the commemoration of the Nakba on May 15, which Israelis will celebrate as their state’s 70th anniversary. The US government plans to inaugurate a US Embassy in Jerusalem as a gesture of shared celebration with the Israeli state.