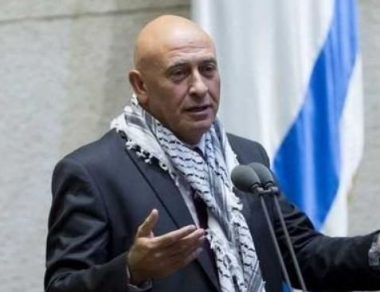 The Israeli Central Court released, Tuesday, Arab Member of Knesset (MK) Bassel Ghattas, after ordering him under strictly-monitored house arrest for ten days, in the town of ar-Rama, in the Galilee, for the ‘crime’ of visiting Palestinian prisoners.

The Israeli prosecutor’s office demanded the court to hold Ghattas under house arrest for 45 days, but the court decided on ten days instead.

His wife and daughter had to pay a 50.000 Shekels bail, and signed legal documents promising to monitor him and ensure he remains at home during the house arrest period.

The court also appointed Ghattas’s parliamentary adviser as a legal guardian to ensure he complies by the terms of his release and house arrest.

Ghattas, a member of the National Democratic Assembly, will still be able to go to the Knesset to vote, but the police must accompany him to the Knesset without entering it with him.

The court ruling also forbids Ghattas from travelling, or contacting any person related to his case, in addition to denying him the right to visit political prisoners for 180 days.

Ghattas was detained by the police three days ago, and was interrogated for three hours under suspicion of what Israel called “conspiracy, and violating the Prison Authority terms” by visiting Palestinian political prisoners, and suspicion of “smuggling mobile phones, and sim cards, to detainees.”

His arrest and interrogation was approved by Israel’s Government Legal Councilor, and the General Prosecutor’s Office, in southern Israel.