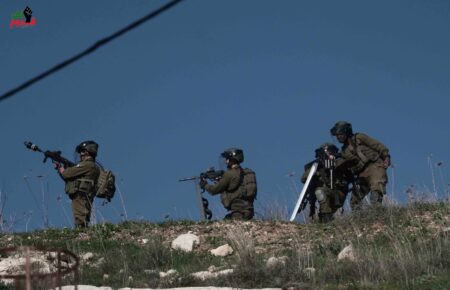 The protesters were gathered, as they do every week, to call attention to the Israeli annexation of village land in contravention of international law. The protesters challenged the Israeli takeover of land that is owned by local Palestinian families.

This week, the protesters numbered in the hundreds.

The media spokesman in the Qalqilia region, Murad Shteiwi, said that when the Israeli army invaded the village, confrontations broke out between local youth and the invading Israeli soldiers. The soldiers fired a heavy barrage of metal bullets and tear gas canisters, causing 4 injuries and dozens of cases of tear gas inhalation, all of whom were treated in the field.

Shteiwi pointed out that a group of Israeli paramilitary settlers accompanied the invading soldiers, and while the soldiers were attacking the protesters, the settlers went around town removing Palestinian flags raised by activists on a mountain overlooking the illegal Israeli settlement of Qadumim.

The soldiers then provided cover for the paramilitary settlers to escape the town and the wrath of the villagers.

Shteiwi explained that today’s march was launched with the participation of hundreds of townspeople. The protesters challenged the planned Israeli provocation, in which Israeli paramilitary settlers plan to march with Israeli flags to the Al-Aqsa Mosque, the third holiest site in Islam.