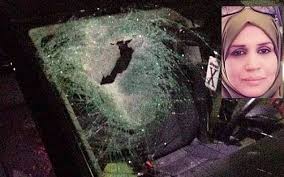 Israeli authorities on Wednesday released new information about the death of Aisha al-Rabi, who was killed by a mob of right-wing Israelis in October 2018, stating that they had found DNA of the central suspect in the case on the rock that caused her death.

Of the five right-wing Israeli teens arrested for the crime last month, just one remains in custody – the other four were released without charges. This is despite the multiple eyewitnesses that saw a group of Israelis hurling rocks at al-Rabi and her husband.

Al-Rabi was a mother of eight children who was driving with her husband near their hometown of Bidya, near Salfit in the northern part of the West Bank. They were attacked by a mob of right-wing Israeli youth who threw numerous rocks at the couple, breaking the windshield and killing al-Rabi.

The new evidence, according to Israeli authorities, was uncovered through detailed laboratory analysis of the rock that struck al-Rabi in the head, killing her.

The Israeli settler charged with the killing is expected to be indicted on Thursday.

Israeli authorities arrested five Israeli settlers on December 30th. Initially the authorities did not disclose that the five had been arrested, due to a gag order forbidding the public disclosure of information or comment on a particular matter.

Shin Bet added that the five were students at the Pri Haaretz religious seminary in the Rechelim settlement, in the northern occupied West Bank district of Nablus, were arrested “after intelligence efforts connecting them to the death of al-Rabi.”

“The four were released after it was decided that the investigation could continue while they were under house arrest and other limiting conditions,” the Shin Bet noted.

The Israeli settlers who carried out the attack are among the 600,000 Israeliswho live in Jewish-only settlements across occupied East Jerusalem and the West Bank in violation of international law.

However, the Palestinian government has no jurisdiction over Israelis in the West Bank, and violent acts carried out by Israeli settlers often occur in the presence of Israeli military forces who rarely act to protect Palestinian residents.