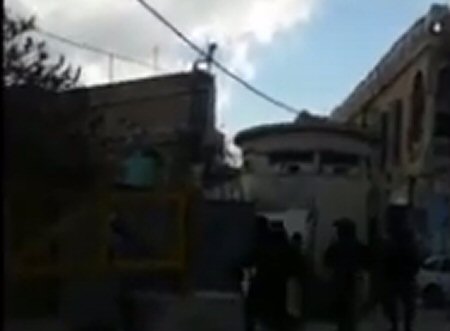 The day after a group of illegal settlers and soldiers invaded a Palestinian home and threatened to slaughter the children in front of them, one of the children was taken into custody by Israeli police.

On Saturday, a group of settlers climbed down onto the rooftop of Emad Eqneibi’s home. Among them was Noam Arnon (נעם ארנון) — a right-wing settler who referred to Baruch Goldstein (the mass murderer of 29 worshipers in the Ibrahimi Mosque)–as an “extraordinary” and “lovely” person.

Under the protection of heavily-armed Israeli soldiers, Arnon told the Palestinian homeowner, “If you don’t leave this house, I will slaughter your children, one after the other, in front of you.”

Responding to settler complaints, a group of soldiers descended on Eqneibi’s house, the following day, and abducted his 14-year-old son, Amer Eqneibi. Video was captured as the soldiers were taking the child away:

Amer is currently being held in Ofer adult prison, outside Ramallah. Locals expect that it may be more than 40 days before the child is released.