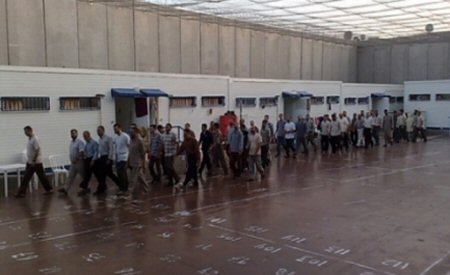 The Commission of Detainees and Ex-Detainees Affairs stated that Palestinian detainees being held in the Israeli detention center of Etzion are subjected to extreme cold, under frigid weather conditions, lack of blankets and winter clothing, and scarcity of medical care.

The Commission quoted its lawyer Jacqueline Fararja, following her visit to the detainees, on Tuesday, as saying that conditions of the detainees are catastrophic, adding that she met with the prisoners, and they are shivering hysterically, of intense cold.

It added that the lawyer pointed out that the prisoners were wearing thin clothing that was given to them by prison administration, at a time when the administration is also depriving them of blankets, winter clothes and heating facilities.

The detainees confirmed to the lawyer that living conditions in the detention center are intolerable, adding that their health status is in a clear deterioration, with most of them falling ill with colds and flu.

The prisoners also told the lawyer that the health status of some prisoners has been aggravated, due to freezing cold, as it was with Osama Salhab, 20, who was assaulted by Israeli soldiers and wounded in his right leg, which resulted in the leg swelling in the freezing cold, with the administration providing him no medical relief.

The lawyer also said that the prisoners complained over the quantity and type of food provided to them, showing that meals distributed to them are too cold and of poor quality, whereas most of the prisoners eat only enough to meet their needs for subsistence.

Al Ray further reports that the commission warned of the ongoing recklessness of the administration, toward Palestinian detainees, and of the abuse and imposition of difficult living circumstances, in open disregard of international conventions and human rights principles and laws.