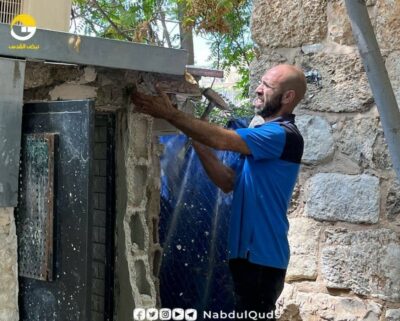 On Sunday, the Israeli occupation authorities forced a Palestinian to demolish his home in the Old City of the occupied capital, Jerusalem, in the West Bank.

The Palestinian, Othman Qaljawi, was forced to demolish his home in Bab Hutta in the Old City to avoid paying excessive fines and fees, especially after he was informed that he would be forced to pay 50.000 Shekels if the City Council demolished the home using its workers and equipment.

The home was demolished for allegedly being built without a permit from the city; the Palestinian tried to save his home and filed appeals to get a license for one room he added to the property to accommodate his family.

The City Council denied the appeals and decided to demolish the property where Othman, his wife, and their five children lived.

In related news, the soldiers abducted Yazan Razem from his work in Bab al-Amoud in Jerusalem and moved him to an interrogation facility.