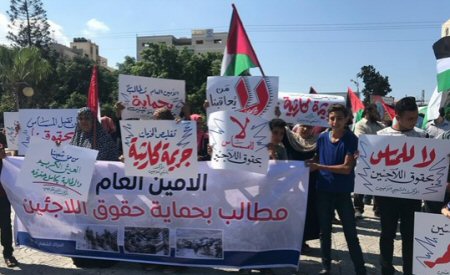 Dozens of Palestinian refugees protested in front of the Unied Nations’ headquarters in besieged Gaza City, on Wednesday, in rejection of the United States President Donald Trump’s speech and US decisions affecting the United Nations Relief and Work Agency (UNRWA).

The protest comes under the slogan “No to Jeopardizing the Rights of Refugees”, in time with the UN General Assembly convening, to affirm the right of refugees to return and live decently and in persistence to their just demands under all of their legitimate rights.

Kayid Jarbou, a youth activist, stressed on Palestinians’ rejection of their rights being jeopardized, pointing out that the silence of the UN and the international community on Israeli crimes and US-international decisions against the people cannot be accepted.

According to Ma’an News Agency, Jarbou described Trump’s speech as “abuse,” saying that it confirms US decisions to liquidate the case and to not recognize all international resolutions, and that it adopts a vision which is considered a crime against the people and the international community.

Musleh also called upon Palestinian President Mahmoud Abbas to confirm the right of return and compensate refugees, during his speech to the UNGA.