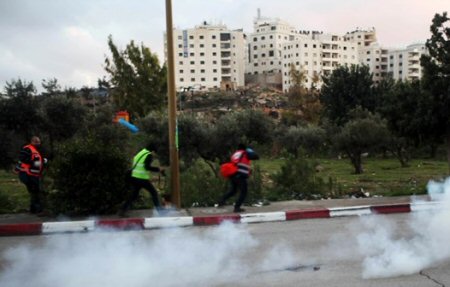 Israeli forces shot and injured two Palestinians with rubber-coated steel bullets, during confrontations that erupted following a weekly protest in the al-Mughayer village of the central occupied West Bank district of Ramallah and al-Bireh, on Friday afternoon.

A Palestinian youth was also shot and injured in the head by Israeli forces, following the weekly Ras Karkar march, in the Ramallah and al-Bireh district of the central occupied West Bank, on Friday afternoon.

The Palestinian Ministry of Health confirmed that a Palestinian youth was injured with a rubber-coated steel bullet in the head.

The ministry added, according to Ma’an, that the youth sustained a fracture in the skull which caused internal bleeding.

He was transferred to the Palestine Medical Center for treatment for surgery, where his condition was reported as stable.

WAFA further reported that two Palestinians were injured, one of them in the head, by Israeli army during clashes on Friday in the village of Taqou, southeast of Bethlehem in the occupied West Bank, according to the Palestinian Red Crescent.

Israeli soldiers fired live bullets and rubber-coated rounds at Palestinian protesters in the village, injuring one of them in the head and the other one in his foot.

The two were moved to a nearby hospital for medical treatment, and their condition was described as moderate.

Almost every Friday, villagers from Taqou organize a nonviolent protest against illegal Israeli settlements, which usually turn into violent confrontations between Israeli soldiers and stone-throwing teenagers.