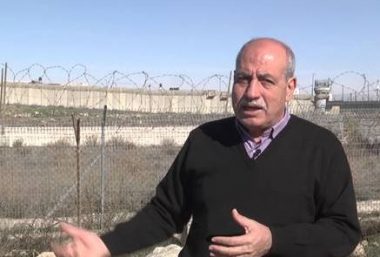 The Palestinian Center for Human Rights (PCHR) condemns the Israeli Police’s raid of the Mapping and Survey Office of the Arab Studies Society- Orient House in Beit Hanina neighborhood, north of occupied Jerusalem.

The Israeli police confiscated the office contents and arrested its Director, Khalil Tufakji, who is also an expert of mapping and settlement. PCHR believes that the closure of this office comes as part of the Israeli measures to create a Jewish majority in the city and suppress any Palestinian activity against the Israeli policies in it.

PCHR also calls upon the intentional community, particularly the Permanent Members of the UN Security Council (UNSC) and High Contracting Parties to the 1949 Fourth Geneva Convention, to fulfill their legal and moral obligations stipulated in the UN Charter and the mentioned Convention, and to take all deterrent measures against the Israeli Government on grounds of its blatant violations in the occupied Palestinian territory (oPt) in addition to stopping all its measures aiming at creating a Jewish majority in East Jerusalem, which is an integral part of the oPt.

According to PCHR’s investigations, On Tuesday early morning, 14 March 2017, large forces of the Israeli Special Police raided the Mapping and Survey Office of the Arab Studies Society- Orient House in Beit Hanina neighborhood, north of occupied Jerusalem. The police officers arrested the Office Director and maps and settlement expert, Khalil Tufakji, and took him to an unknown destination after confiscating his cell phone and some contents of the office.

The Israeli police closed the office for 6 months upon an order from the Israeli Interior Minister, Gelad Ardan.

Luba al-Somari, Spokesperson of the Israeli police to the Arab Media, claimed that this order came, “after the police received information that the Palestinian Authority had activated an office in Jerusalem to be used as a mapping and survey office for record-keeping and monitoring and following the Palestinian lands in Jerusalem in addition to following up Israel’s changes to various related fields.”

According to the Israeli claims, Tufakji “restored the office’s former work under the cover of an office for geographic consulting. Moreover, the office, which is funded by the PA, was in constant contact with the Palestinian security services in Ramallah.

The office was transferring names of those interested in selling lands and estates in East Jerusalem and if there were suspicions of counterfeiting or intentions to sell lands and estates to Israelis, the Palestinian security services initiated immediate investigations in this regard in violation of the application of the West Bank and Gaza Strip transitional period agreements (limitation of activities).”

It should be mentioned that Tufakji is one of the most important Palestinian experts in land confiscation and settlement issues in occupied Jerusalem.

He works on exposing the Israeli policies and measures, which violate the international humanitarian law in the oPt in general and occupied Jerusalem in particular.

In light of the above mentioned, PCHR:

1. Calls upon the international community to put pressure on Israel to release Tufakji and reopen the “Mapping and Survey office of the Arab Studies Society” and to stop immediately and seriously the Israeli attempts to create Jewish majority in occupied Jerusalem;

2. Reiterates its calls for an immediate and effective international action to restore confidence in the rule of the law and put an end to the prolonged Israeli challenge and denial of the international law and to the inherent impunity enjoyed by Israel for decades;

3. Calls upon the UN, particularly the UNSC and General Assembly, to take practical measures to face Israel’s blatant violation of the international law rules and to put an end to treating Israel as a State above the law; and

4. Calls upon the High Contracting Parties to the Fourth Geneva Convention to fulfill their legal obligations through taking measures to guarantee Israel’s respect for the convention.