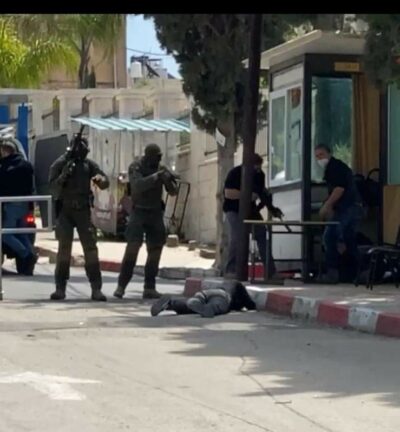 On Tuesday and Wednesday, Israeli occupation forces (IOF) moved into Kadoorie University’s campus in Tulkarm, as the occupation continues to orchestrate attacks on educational institutions. During the incursion, 7 students were wounded, including 5 university students and a security officer. The latter was arrested despite being injured.

According to investigations conducted by the Palestinian Centre for Human Rights (PCHR) at approximately 12:10 on Wednesday, 13 April 2022, a Special Israeli Unit moved into Kadoorie University’s campus in Tulkarm in a civilian car.

A number of Israeli soldiers dressed in plain clothes and uniforms stepped out of the car and directly opened fire at three Palestinians, who were identified as:

Ahmed Majed Katana (21), a university student, was wounded with a live bullet in his head.

‘Odai Zaghal Hasan al-Akhras (21), was wounded with a live bullet in his left shoulder.

Danyal al-Jaber, security officer from Tulkarm camp, sustained wounds in his feet. IOF took him into their vehicle and then left the university.

Jebreel Hejjah, Director of Public Relations Department at Kadoorie University, told PCHR’s fieldworker that: “We were surprised with a civilian car that entered the university and dropped off an Israeli force in civilian clothes at the university entrance and immediately fired two live bullets at two young men who were by the university gate: Ahmed Majed Katana (21), a Kadoorie University student; and ‘Odai Zaghal Hasan al-Akhras (21), not affiliated with the university, who sustained live bullet wounds in the left shoulder. Moreover, the special force simultaneously fired 4 other live bullets at Danyal al-Jaber, a security officer at the University, while he was trying to escape. Al-Jaber sustained wounds in his feet and fell to the ground. Despite being injured, IOF arrested him, took him with them, and withdrew from the university.”

At approximately 12:30 on Tuesday, 12 April 2022, following clashes that erupted near IOF’s military site next to Kadoorie University, an Israeli infantry unit stormed Kadoorie University’s campus from the western side adjacent to the annexation wall, while shooting live and rubber bullets, sound bombs, and teargas canisters at the university students. As a result, 4 of them sustained rubber-bullet wounds; 2 in their chest and the other in their limbs.

PCHR condemns the recurrent IOF raids on Kadoorie University’s campus, use of firearms, and attacks on students, visitors, and security, as well as the arrest of a university staff member. PCHR sees these recurrent attacks as systemic against educational institutions, with terrorizing tactics against students and faculty members.

PCHR calls on the international community and the High Contracting Parties to the Fourth Geneva Convention to take serious action to stop IOF’s crimes against Palestinian civilians and civil society organizations.