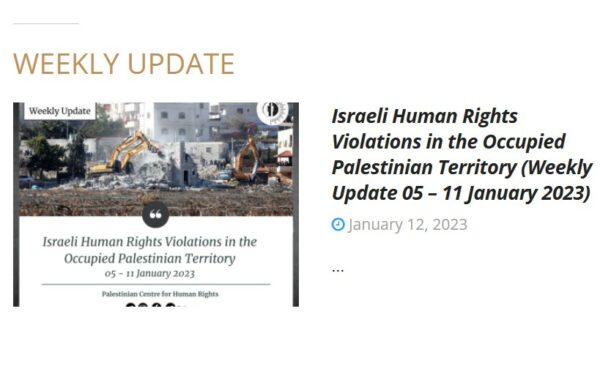 10 Palestinians, including 2 children, were injured, and dozens of others suffocated in IOF attacks in the West Bank, including East Jerusalem. Details are as follows:

On 05 January 2023, a 14-year-old child was wounded with a live bullet in the foot during clashes with IOF in Al-‘Aroub refugee camp, north of Hebron.

On 06 January 2023, 2 Palestinians were wounded with rubber-coated metal bullets during IOF’s suppression of Kafr Qaddoum peaceful weekly protest, northern Qalqilya. On the same day, a 15-year-old child was wounded with a live bullet in the head during clashes with IOF in ‘Aqabat Jaber refugee camp in Jericho.

On 09 January 2023, 2 Palestinians were wounded with live bullets during clashes with IOF after the latter’s incursion into ‘Aqaba village in Tubas. IOF arrested one of them and handed him to the Palestine Red Crescent later at the Jalameh checkpoint, north of Jenin.

”So far in 2023, IOF attacks killed 6 Palestinians, including 2 children, and the rest were members of the Palestinian armed groups; one was a child, and dozens were injured in the West Bank, including East Jerusalem.

IOF displaced 2 families of 36, including 5 women and 11 children, after demolishing 3 houses.  IOF also destroyed 2 facilities, a well and a container and confiscated an excavator and a truck in the West Bank, including East Jerusalem. Details are as follows:

On 06 January 2023, IOF confiscated an excavator and a truck belonging to Al-Dhahiriya municipality, east of Al-Dhahiriya, southern Hebron, while collecting garbage before taking it to the main landfill.  As a result, the waste collection crisis exacerbated as the municipality provides services to about 35,000 citizens. This is the second excavator confiscated by IOF within 2 days under the pretext that the landfill is located in Area C.

On 08 January 2023, IOF notified 5 Palestinians to stop construction works in 3 houses, 2 wells and a wooden shed in Yatta, south of Hebron, under the pretext of unlicensed construction in Area C.

On 09 January 2023, IOF, accompanied with the Israeli occupation municipality crews and surveyors, raided a plot of land in Beit Safafa village in East Jerusalem, and surveyed it in a prelude to seize it for settlement purposes.

IOF then arrested one of the land owners after beating and pushing him, but later released him. The plot of land is 24 dunums and parts of it were previously confiscated by IOF to establish settlement units as announced last year in the “Givant Hatmos” settlement established on the neighborhood lands.

At the time, the landowners resorted to the Israeli court, which ruled in favor of the landowners. However, the occupation municipality crews raided the land again and began surveying it.

On 10 January 2023, IOF demolished a 90-sqm house of one floor in Al-Dayouk Al-Tahta village, west of Jericho, rendering a family of 7 homeless, under the pretext of unlicensed construction in Area C.

On the same day, IOF demolished a 2-storey house and a well in Kafr Al-Dik village, west of Salfit, displacing a family of 11, under the pretext of unlicensed construction in Area C. IOF also demolished fences around two plots of 3000-sqm land, a stone chain and a container of car ties in ‘Anata village in East Jerusalem, under the pretext of unlicensed construction.

On 11 January 2023, IOF demolished a 300-sqm under-construction house of 2 floors, east of Hebron, under the pretext of unlicensed construction in Area C. IOF previously demolished another house for the same owner on 23 October 2022 as 3 families of 18, including 11 children and 3 women, was supposed to move into the house.

On the same day, IOF handed a notice to a Palestinian to demolish his 100-sqm house, where 6 people, including 4 children, lived in Yatta, south of Hebron, under the pretext of unlicensed construction in Area C.

”Since the beginning of 2023, IOF made 16 families homeless, a total of 103 persons, including 16 women and 33 children. This was the outcome of IOF demolition of 13 houses: owners of 4 of these houses were forced to self-demolish them while 2 were demolished on grounds of collective punishment. IOF also demolished 4 other civilian objects, razed other property and delivered dozens of notices of demolition, cease-construction, and evacuation in the West Bank, including East Jerusalem.

Settlers, protected by IOF, carried out 5 attacks on Palestinians and their property in the West Bank, including East Jerusalem. Details are as follows:

On 09 January 2023, a settler tried to run over a group of Palestinians in the Sheikh Jarrah neighborhood, north of East Jerusalem, coinciding with IOF’s incursion into the neighborhood. Instead of arresting the settler, IOF arrested one of the Palestinians, whom the settlers ran over, from his home.

On the same day, settlers attacked 2 Palestinians, including a woman, with sticks and stones, causing them injuries and bruises and breaking the windows of 3 vehicles in Khalayel Al-Louz village, south of Bethlehem. Settlers also assaulted a Palestinian after IOF stopped his vehicle at a military checkpoint at the entrance to the Nabi Saleh village in Ramallah before arresting him.

On 10 January 2023, it was found that settlers uprooted and cut down 18 olive trees in Yasouf village in Salfit, as the owner knew about it when he arrived at his land.

”Since the beginning of the year, settlers conducted at least 10 attacks against civilian Palestinians and their properties.

IOF carried out 187 incursions into the West Bank, including East Jerusalem. Those incursions included raids and searches of civilian houses and facilities and the establishment of checkpoints.

During those incursions, 108 Palestinians were arrested, including 11 children; one was arrested inside the Israeli Magistrate’s Court in East Jerusalem while attending his brother’s court hearing.

During this week, IOF used violence during their house raids, including beating the detainees and their families during their arrests and damaging the houses’ contents. On 10 January 2023, IOF carried out a limited incursion in eastern Khan Yunis in the Gaza Strip.

On Thursday, 05 January 2023, the Israeli Security Cabinet approved new steps in response to so-called “the Palestinian Authority’s decision to wage political and legal war against the State of Israel.”

These punitive measures also include a freeze on Palestinian construction projects in the West Bank’s called Area C that is under full Israeli control; repealing the VIP passes, which the Israeli occupation issues for the Palestinian figures; and taking steps against organizations in the West Bank promoting hostile activity, including legal and political activity under the “guise of humanitarian work.”

PCHR believes that these measures constitute a complex crime against the Palestinian people: Israel commits the crime and punishes anyone trying to prosecute it or hold it accountable before the international courts!

These measures will have serious consequences on the PA’s financial performance and the movement of the PA figures, especially the staff of the Palestinian Foreign Affairs Ministry, which leads Palestine’s efforts at the UN and international forums. These measures also foreshadow a new campaign targeting the human rights organizations, which work on prosecuting Israel before the international courts. (For more details: press release)

On 07 January 2023, IOF banned the convening of a students’ parents meeting in Jerusalem in Arba’een Diwaniya Hall in Al-‘Issawiyya in East Jerusalem, under the pretext of being sponsored by the Palestinian Authority.  The ban came upon the orders of the new Israeli National Security Minister, Itamar Ben Gvir.

Raed Taha, Member of the Students’ Parents Council, told PCHR’s fieldworker that moments after the meeting began, Israeli intelligence and police officer raided Al-Diwaniyya Hall, interrogated members of the Students’ Parents Council, summoned many of them for interrogation, and forced everyone in the hall to leave.  They then closed the hall and fixed a decision signed by Ben Gvir at its gate banning the meeting according to the Law Implementing Agreement on Gaza and Jericho Areas (Restrictions of Activity) 1994.

Israeli occupation maintains its illegal and inhuman 15-year closure on the Gaza Strip. Details available in PCHR’s monthly-update in the Gaza crossings.

On 10 January 2023, IOF prevented Diaa Abu Daher (28), from Rafah, from traveling via Beit Hanoun “Erez” crossing in the northern Gaza Strip while he was on his way for treatment from a brain tumor to Al-Mutala’ Hospital in East Jerusalem.

”So far in 2023, IOF established 191 temporary military checkpoints and arrested 10 Palestinians at those checkpoints.