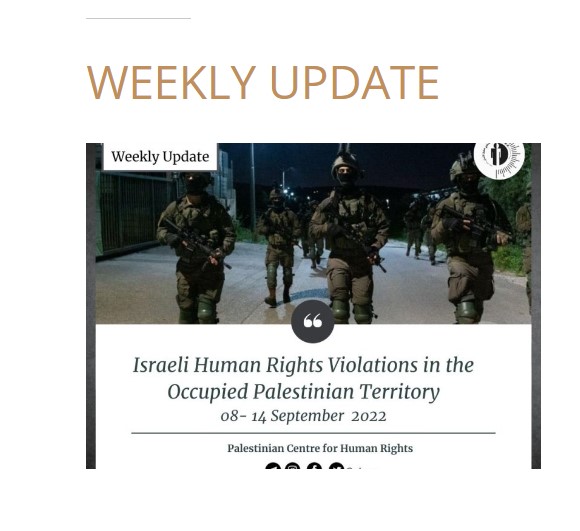 A child was killed, 8 others were wounded, and dozens of others suffocated in Israeli Occupation Forces (IOF) attacks in the West Bank, including East Jerusalem. Details are as follows:

On 08 September 2022, IOF killed Haytham Hani Mubarak (17) from Beitounia, West of Ramallah, with several bullets at the DCO checkpoint near the entrance to Beitin village, east of Ramallah, and kept his body in custody, claiming that Mubarak tried to stab a soldier with a knife, yet there was no eyewitness to the incident.

Meanwhile, those injured were victims of excessive use of force during IOF incursions into cities and villages and suppression of peaceful protests organized by Palestinian civilians, and they were as follows:

On the same day, IOF violently attacked Palestine TV journalist, Yousuf Mohammad ‘Aadi (36), when he was on Al-Wad Street in East Jerusalem, causing him bruises, wounds and fractures before arresting and later releasing him on bail the following day.

‘Aadi said to PCHR’s staff that IOF violently assaulted him and dragged him to the ground when he started screaming for help to passersby, who tried to intervene, but the soldiers prevented them and continued hitting him on the head, grabbed his hair and yanking him many times to the ground between the iron bars of a barrier.  Although he fainted, they continued beating him and then tied him up and arrested him.

On 09 September 2022, 4 Palestinians were shot by IOF’s rubber bullets in clashes that followed IOF’s suppression of Kafr Qaddoum weekly protest in northern Qalqilya.

IOF forced 2 Palestinians to self-demolish 2 houses and an animal barn in East Jerusalem. Details are as follows:

On 09 September 2022, IOF forced a Palestinian to self-demolish a barrack he owned and used as an animal barn in Al-Isawiya village in occupied East Jerusalem under the pretext of unlicensed construction.

On 12 September 2022, IOF forced a widow to self-demolish her house in Silwan village in occupied East Jerusalem under the pretext of unlicensed construction, rendering her and her 3 children homeless.

”Since the beginning of 2022, Israeli occupation forces made 113 families homeless, a total of 670 persons, including 130 women and 310 children. This was the outcome of IOF demolition of 118 houses and 41 residential tents. IOF also demolished 90 other civilian economic objects, leveled vacant areas of land and delivered dozens of notices of demolition, cease-construction, and evacuation.

On 08 September 2022, an Israeli settler threw stones at a vehicle travelling on Bypass Road (60) near Bani Na’im village, east of Hebron, and broke its windshield. On the same day, 2 Palestinians were injured and sustained bruises while 5 cars were badly damaged as a result of the settlers’ attacks in Sinjil village in Ramallah

On 13 September 2022, a Palestinian sustained wounds and fractures when Israeli settlers assaulted him in his land near at-Tuwani village close to Havat Ma’oun settlement outpost, south of Hebron. When a Palestine Red Crescent Society (PRCS) ambulance arrived and tried to evacuate the injured, the settlers intercepted it and damaged its tires. IOF arrested the injured and took him via an Israeli ambulance to Soroka Hospital.  He was then referred for investigation to the police station in Kiryat Aba’ settlement, claiming that he attempted to kill a settler. Later on, IOF backups arrived in the area, opened fire, and fired tear gas canisters at the Palestinians there.  As a result, some of them suffocated.  Also, IOF arrested 10 Palestinians and interrogated them about a settler’s injury in clashes against Palestinians in the area.

”Since the beginning of the year, settlers conducted at least 180 attacks. In two of the attacks, 2 Palestinians were killed.

On 08 September 2022, IOF arrested 2 Palestinians, including a child, while trying to infiltrate via the border fence, east of Rafah, and released them the next day. On 13 September 2022, the Israeli Naval Forces arrested 4 fishermen after intercepting their boat off Gaza Valley shore.

The Israeli occupation maintains its illegal and inhuman 15-year closure on the Gaza Strip. Details available in PCHR’s monthly-update in the Gaza crossings.

On 08 September 2022, IOF established a military watchtower near the western entrance to Tuqu village, east of Bethlehem.

On 11 September 2022, IOF closed the metal detector gate established at the western entrance to Husan village in Bethlehem and later reopened it.

”So far in 2022, IOF established 3,105 temporary military checkpoints and arrested 146 Palestinians at those checkpoints