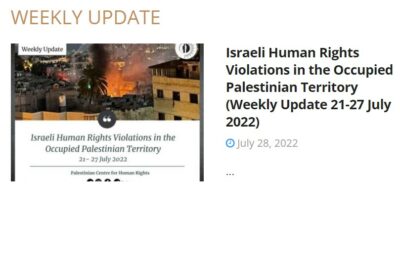 Two Palestinians were killed and 16 others, including 3 children, a person with disability and journalist, were injured by Israeli Occupation Forces (IOF)’s fire, while dozens of others suffocated in IOF attacks in the West Bank, including occupied East Jerusalem. Details are as follows:

On 24 July 2022, IOF killed two members of the Palestinian armed groups and wounded 4 civilians, including one in serious condition.  This happened during IOF incursion into Palestinian Authority-controlled areas and targeting a residential house with explosives and bullets in Nablus’s Old City.  Details are here.

Meanwhile, those injured were victims of excessive use of force during incursions into the Palestinian cities and villages and IOF suppression of peaceful protests organized by Palestinian civilians and they were as follows:

At night, dozens suffocated due to teargas inhalation and sustained bruises after being beaten up following IOF’s incursion into Batn al-Hawa neighborhood in Silwan in East Jerusalem, where IOF raided several houses and violently assaulted their residents.  IOF also arrested a Palestinian and his son and later released them.

On 24 July 2022, a child sustained a bullet injury in his back in clashes after IOF’s incursion into Qabatia village in Jenin.  IOF arrested 3 Palestinians and later withdrew.

On 24 July 2022, a Palestinian journalist was injured with a bullet in his leg while covering clashes that accompanied IOF’s incursion into Deir Abu Mesh’al village in Ramallah.

On 26 July 2022, a person with disability sustained serious wounds after being shot by IOF at Huwara checkpoint, the southern Nablus entrance, and then taken to an Israeli hospital.  IOF claimed that he did not obey their orders.  On the same day, 4 Palestinians were wounded in clashes that accompanied IOF’s demolition of 2 family houses of 2 Palestinian prisoners, from Salfit, in the Israeli jails.

”So far in 2022, IOF attacks killed 68 Palestinians, including 51 civilians: 14 children, 5 women (one was a journalist Shireen Abu ‘Aqlah), a Palestinian stabbed by an Israeli settler and the rest were activists; 6 of them were assassinated. Also, 984 others were wounded in these attacks, including 114 children, 5 women, and 20 journalists all in the West Bank, except 15 fishermen in the Gaza Strip. Moreover, a male and female prisoners died in the Israeli jails.

IOF conducted demolitions that targeted 3 houses and a tinplated room, rendering a family of 12, including 8 children, homeless. Also, IOF razed two commercial facilities and an agricultural land while they handed an order to seize a plot of land and handed 14 cease-construction notices for facilities in the West Bank. Details are as follows:

On 27 July 2022, IOF razed 75 dunums and uprooted 1000 olive trees in Hejah village, eastern Qalqilya.  On the same day, the Israeli authorities issued a military order to seize a 780-sqm land at the entrance to Tuwani village, southern Hebron.  This confiscation order came so that IOF establish a  fixed military observation post with steel detector gates at the village entrance, hindering Palestinians’ movement.  It should be noted that this is the 28th gate established at the village and city entrances in Hebron.

”Since the beginning of 2022, Israeli occupation forces made 82 families homeless, a total of 489 persons, including 95 women and 233 children. This was the outcome of IOF demolition of 86 houses and 40 residential tents. IOF also demolished 61 other civilian objects, leveled vacant areas of land, and delivered dozens of notices of demolition, cease-construction, and evacuation.

On 26 July 2022, under its collective punishment policy against families of Palestinians accused of conducting attacks against Israeli occupation forces (IOF) or settlers, IOF demolished two family houses of two Palestinian prisoners in Salfit in the West Bank, rendering two families of 18, including 2 women and 8 children, homeless. During the demolition, clashes broke out between Palestinians and IOF; as a result, 4 Palestinians were injured.

”So far in 2022, IOF demolished 8 houses and sealed a nineth after destroying its internal contents under IOF’s collective punishment policy. Meanwhile, there are many houses threatened of demolition on the same grounds.

On 22 July 2022, settlers attacked Palestinian shepherds in al-Juwaya area in Hebron, forcing them to leave pastures under threat.

”So far this year, settlers carried out 160 attacks on Palestinians and their properties in the West Bank. In one of the attacks, a Palestinian was stabbed to death by a settler.

IOF carried out 178 incursions into the West Bank, including occupied East Jerusalem. Those incursions included raids and searches of civilian houses and facilities and establishment of checkpoints. During those incursions, 54 Palestinians were arrested, including 7 children, and 2 vehicles were confiscated in Hebron.

”So far in 2022, IOF established 2563 temporary military checkpoints and arrested 114 Palestinians at those checkpoints