PCHR: “On 73rd Friday of Great March of Return: 2 Children Killed and 81 Civilians Injured, including 39 Children, 1 Journalist and 2 Paramedics by Israeli forces” 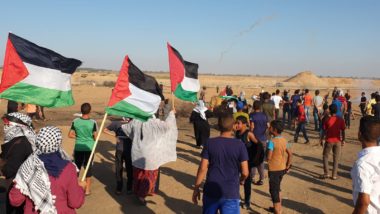 The Palestinian Center For Human Rights (PCHR): On 73rd Friday of Great March of Return, 2 children were killed and 81 civilians injured as a result of the Israeli military’s continued use of excessive force against peaceful protests along the Gaza Strip’s eastern border; 38 children, 1 journalist and 2 paramedics, including a female, were among those injured this Friday, 06 September 2019.

Despite the decrease in the number of injuries among this week’s protestors, in comparison to last Friday, Israeli forces escalated their use of excessive force against the protesters with the use of live ammunition and targeting the upper part of protestors’ bodies, killing 2 children and injuring 52 protestors with live bullets and shrapnel.

The Supreme National Authority of Great March of Return and Breaking the Siege called for today’s protests under the slogan “Protecting the Home Front.”  The protests lasted from 15:00 to 19:00 and involved activities such as speeches by political leaders and theatrical performances. Hundreds of civilians protested at varied distances from the border fence across the Gaza Strip. The protestors threw stones, Molotov Cocktails and firecrackers at the Israeli forces, well-shielded hundreds of meters away, while the latter responded with excessive force.

To this date, PCHR documented 210 killings by Israel since the outbreak of the protests on 30 March 2018, including 46 children, 2 women, 9 persons with disabilities, 4 paramedics and 2 journalists. Additionally, 13,809 were wounded, including 2,932 children, 422 women, 233 paramedics and 213 journalists, noting that many of those injured had sustained multiple injuries on separate occasions.

As a result, ‘Ali Sami ‘Ali al-Ashqar (17), from Jabalia refugee camp, was killed after being shot with a live bullet to the chest. According to PCHR’s investigations, at approximately 17:40, ‘Ali was shot with a bullet that entered the backside of his chest and exited through the lower front side of his neck while only few meters away from the border fence.

A crew member of Military Medical Services evacuated him to the Indonesian Hospital, he was declared dead upon arrival at 18:08. Moreover, 35 civilians were injured, including 25 children: 28 with live bullets and their shrapnel; 3 with tear gas canisters; and 4 with rubber bullets.

Dozens of protestors approached the fence and threw stones with slingshots at Israeli soldiers. The soldiers fired live and rubber bullets and tear gas canisters at the protestors.

As a result, Khaled Abu Baker Mohammed Sufian al-Rab’ie (14), from al-Shija’iyah neighborhood, was killed.  According to PCHR’s investigations, the child arrived at Shifa Hospital at approximately 17:35 with a bullet wound in his waist, and he was pronounced dead at 17:45.

Moreover, 16 civilians were injured, including 6 children, a female paramedic and a journalist: 6 with live bullets, 2 with rubber bullets and 8 with tear gas canisters.

Central Gaza: Hundreds of civilians, including women and children, took part in the eastern Bureij refugee camp protests; dozens gathered adjacent to the border fence at a range varying between 2 – 70 meters. The Israeli soldiers, reinforced with 11 military jeeps, launched a drone to photograph protestors who had thrown stones and sound bombs at the military jeeps and shot them with live and rubber bullets in addition to teargas canisters. As a result, 6 civilians, including 3 children, were wounded: 4 with live bullets and shrapnel, 2 with rubber bullets.

Khan Younis: The Israeli forces’ use of force against the protesters, who gathered in the encampment in eastern Khuza’ah and near the border fence, resulted in the injury of 13 civilians, including 4 children and a paramedic: 5 with live bullets and shrapnel, 2 with rubber bullets; and 6 with tear gas canisters. Furthermore, many other civilians were wounded with rubber bullets, but their injuries were reported to be minor, while others suffocated due to teargas inhalation.  They received treatment on the spot in the field medical point. The wounded paramedic, As’ad Sami Mohammed Abu Ghalwah (30), from Khan Younis, was shot with a rubber bullet to the right foot.

Rafah: hundreds participated in the eastern Shokah protests, where folklore songs and speeches were held. Dozens approached the border fence and threw stones at the shielded Israeli soldiers, who responded with live and rubber bullets and teargas canisters against the protestors. As a result, 11 civilians were injured, including a child. It was documented that 9 were shot with live bullets and their shrapnel and 2 were shot with rubber bullets.