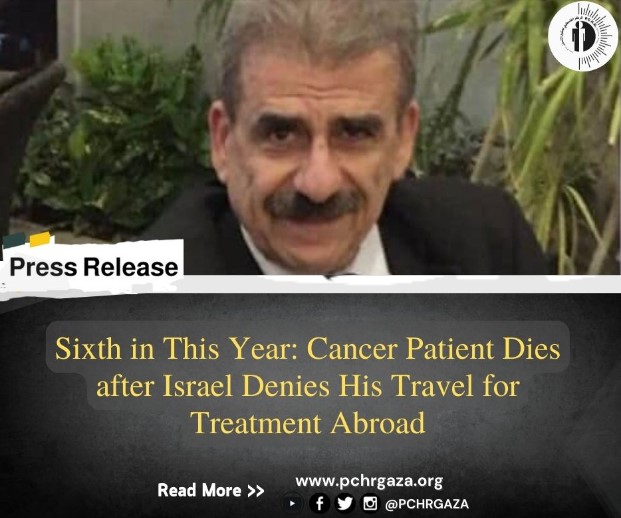 The Palestinian Center For Human Rights (PCHR): Date: 21 September 2022:  Yesterday, 20 September 2022, a patient namely, Tayseer Daoud Yousuf Al-Sayegh (67), died at dawn when the Israeli authorities denied his travel for treatment at Al-Muttala’ Hospital in occupied Jerusalem. Accordingly, since the beginning of this year, the number of patients denied travel for treatment abroad has risen to 6, including 3 children.

Mikhail Yousuf Nicola Al-Nasrawi (28), the patient’s companion, said that in a medical examination for al-Sayegh at al-Quds Hospital in Gaza City late in July 2022, doctors discovered a cancerous tumor spread in his lung and liver and confirmed the urgent need for an urgent treatment protocol that is not available in the Gaza Strip Hospitals and only available in Al-Muttala’ Hospital in occupied Jerusalem.

Thus, al-Sayegh received medical referral and a hospital appointment on 05 September 2022. He then applied for a permit to the Israeli authorities to travel via Beit Hanoun ‘Erez’ crossing and receive treatment at the Hospital on the date appointed for his treatment, yet the latter delayed responding to his travel permit and the appointment date expired.

As a result, he had to obtain a new appointment on 02 October 2022 and applied again for the permit to allow him to travel. The patient headed to the Palestinian Centre for Human Rights (PCHR) to help him obtaining a permit, but his health condition deteriorated, and he died at dawn on Tuesday before his permit was issued.

PCHR, in its capacity as the legal representative, intervened and sent an urgent request to the Israeli legal advisor at Bein Hanoun “Erez” crossing to allow the patient to travel on 05 September 2022 but received a response that the permit was denied.

PCHR then submitted a challenge to the Israeli Prosecution on 15 September to all the patient to travel due to his serious condition, but the patient died before receiving a response to the challenge.

According to PCHR’s follow-up, since the beginning of so far this year, the Israeli authorities have obstructed the travel of 5,001 patients with serious diseases that lack treatment at the Strip’s hospitals.[1]

These restrictions coincide with the deterioration of the healthcare system in the Gaza Strip due to the Israeli-imposed closure on the Gaza Strip for the last 16 years, causing a perpetual shortage of essential drugs and medical devices and insufficient number of specialized health personnel.

PCHR condemns the obstruction of Gaza Strip Patients’ travel for treatment abroad, and calls on the international community, including the High Contracting Parties to the 1949 Fourth Geneva Convention to exert pressure on the Israeli occupation authorities to assume their legal responsibilities towards the Gaza Strip population, including patients, and to ensure that adequate and safe mechanism is provided for their travel.

PCHR calls on the international community to pressure Israel to lift the closure imposed on the Gaza Strip in line with Security Council Resolution No. 1860 that calls for the unimpeded provision and distribution of humanitarian assistance throughout Gaza, including of food, fuel, and medical treatment which means allowing the entry of medical supplies used in radiotherapy, chemical drugs and periodic examinations for cancer patients that are not available in Gaza hospitals.