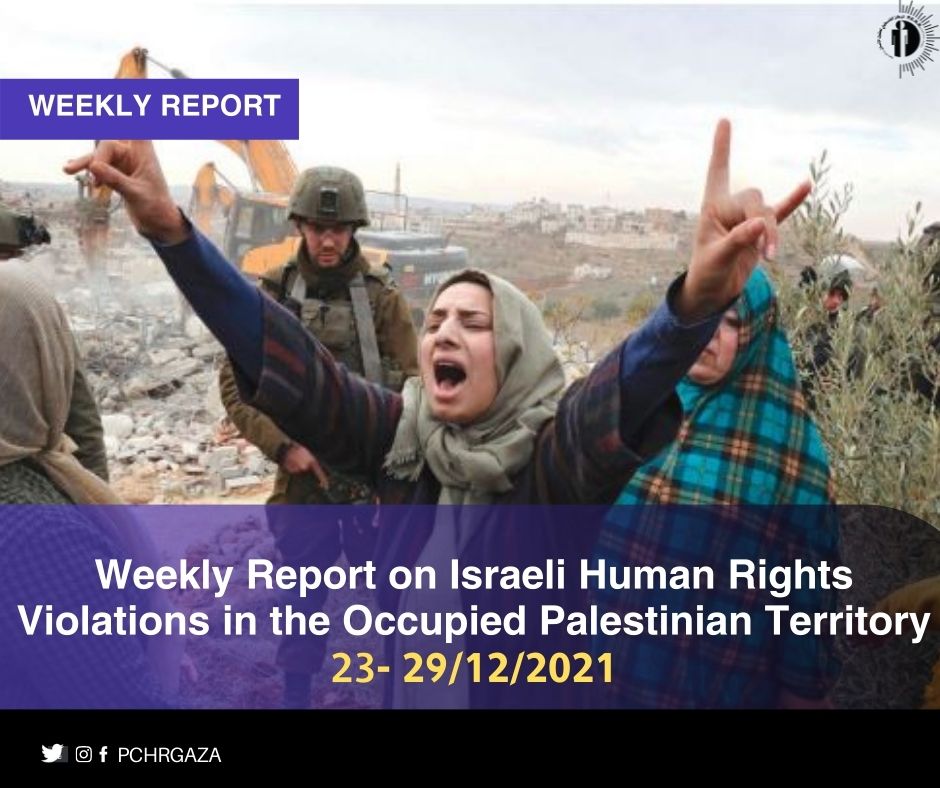 Israeli occupation forces (IOF) continued to commit crimes and multi-layered violations against Palestinian civilians and their properties, including raids into Palestinian cities that are characterized with excessive use of force, assault, abuse, and arrests against civilians. Meanwhile, the Gaza Strip is in its 15th year under closure, as Israel exercise the worst known collective punishment in human history, exacerbating the humanitarian hardships across the territory.

During the reporting period, IOF attacks rendered 23 Palestinians wounded in excessive use of force in the West Bank and arbitrary bombing in the Gaza Strip; also, dozens suffocated due to tear gas inhalation:

Kafr Qaddum: 6 wounded, including a child, in IOF attacks on a peaceful protest


Burqa, Nablus: 7, including 2 children, in clashes with IOF

Tubas: 5 wounded, including 1 in critical condition

IOF carried out 101 incursions into the West Bank, including occupied East Jerusalem. Those incursions included raids of civilian houses and shootings, enticing fear among civilians, and attacking many of them. During this week’s incursions, 60 Palestinians were arrested, including 6 children and a woman.

Tubas: 9 residential tents demolished, as well as 14 others used for sheep. The tents were the property of 9 families in Khirbet Ibziq in the northern Jordan valleys

As part of the collective punishment policy adopted by the Israeli forces against the families of Palestinians accused of carrying out attacks against Israeli soldiers or/and settlers, IOF delivered a demolition notice to Fadi Mahmoud Abu Shkhidem’s (42) family; Abu- Shkhidem was killed by IOF in November 2021.

Additionally, IOF continued to divide the West Bank into separate cantons with key roads blocked by the Israeli occupation since the 2000 Second Intifada -still closed to this date- and with temporary and permanent checkpoints, where civilian movement is restricted, and they are subject to arrest, especially at al-Karama border crossing, alongside the Palestinian-Jordanian border.

The Bethlehem Education Directorate stated that Israeli soldiers tried to raid Teqoa School for Boys while the students were having tests. The teachers confronted the soldiers and fistfight occurred; during which, the soldiers attacked the teachers with riffles’ butts and fired teargas canisters and sound bombs in the school campus. As a result, the School Principal, Majed al-Sha’er, and ‘Eid Subeih, a teacher, sustained bruises and wounds in the face while dozens of teachers and students suffocated due to teargas inhalation.

It should be noted that IOF lately escalated their attacks on students at Teqoa school through presenting near the schools and firing teargas canisters and sound bombs at them while students are inside or on their way out. Also, they arrest and detain students as well as searching them from time to time, disturbing and hindering education.

Moreover, ‘Aziz Rawhi Ramadan al-Sous (22) sustained a shrapnel wound in the nose. All of them live in Beit Lahia and were taken to Beit Hanoun Governmental Hospital. Nidal and Belal were referred to the Indonesian Hospital for their minor injuries while Ahmed and ‘Aziz were referred to al-Shifa Hospital as Ahmed’s condition was critical while ‘Aziz’s was minor. IOF declared that their artillery shelling came after there was a shooting from the Palestinian side that led to the minor injury of an Israeli.

Mostafa said that during the past years, his family submitted a license request to the municipality and paid tens thousands of shekels to lawyers and engineers, but in vain as the municipality refused the request under the pretext of public utility despite family ownership of the land. Mostafa indicated that 21 days ago, the family received an eviction notice to implement the demolition. The family tried to appeal the demolition decision, but the municipality refused and insisted to implement the demolition. He pointed out that the family asked the lawyer to submit a self-demolition request to the municipality, which promised the lawyer to respond his request after few days, but it demolished the building to fine the family NIS 180,000 as demolition fees. Mostafa said that while demolishing the building, IOF closed the western entrance for several hours, causing a traffic jam. Also, separate clashes erupted between Palestinian young men and IOF, who beat Mostafa family members, villagers and journalists who were covering the demolition.