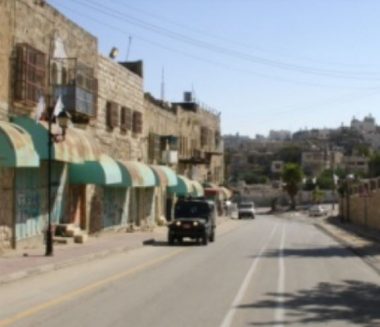 Published By peace Now on August 31st: The Israeli Army’s Spokesperson Unit announced that the Head of the Central Command, Major General Roni Numa, signed a military order establishing a municipal services administration for the Jewish settlers in Hebron.

“By granting an official status to the Hebron settlers, the Israeli government is formalizing the apartheid system in the city. This step, which happened immediately following the announcement on the evacuation of the settlers who took over a house in Hebron, is another illustration of the policy of compensating the most extreme settlers for their illegal actions.”

It appears that the order does not create a new local authority or a new community within a regional authority, but rather a settler body with a certain degree of administrative power. Needless to say, this body will not include any Palestinian representation.

We are currently trying to obtain the military order and the legal opinion leading to it, in order to be able to further understand the implications of this development.

1) Although the settlers already treat specific areas in the city as their own, this split in local governance formalizes the apartheid system in Hebron, with the approval of Minister of Defense Lieberman.

2) It is still unclear whether the new “municipal services administration” will have authority on infrastructure in the area, but if so, this would constitute a violation of the Hebron Protocol from 1997, according to which the responsibility and authority over infrastructure are in the hands of the Palestinians.

3) We can assume that the establishment of the “municipal services administration” will lead to the handling of budgets directly by the settlers, rather than by the Civil Administration, something which is also likely to result in less transparency in fund allocation.