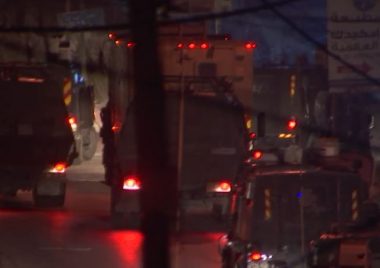 The soldiers invaded and violently searched dozens of homes in various parts of the West Bank, and interrogated many Palestinians while inspecting their ID cards, before abducting the twenty-four residents.

The Palestinians were taken from their homes in Nablus city, in addition to the towns of Awarta, ‘Asira ash-Shamaliya and Beit Dajan.

In Bethlehem governorate, the soldiers invaded Beit Sahour city, in addition to Doha and al-Khader towns, and fired many gas bombs and concussion grenades, during ensuing protests.

The soldiers also abducted Mohammad Fayez Salhab, 18, from his home in the al-Karkafa area, in Bethlehem.

Another Palestinian, identified as Mahmoud Abdul-Afo al-Emla, was taken prisoner from his home in Beit Ola town, northwest of Hebron.

In Tubas, in northeastern West Bank, the soldiers abducted Yousef Walweel and Zakariya Oleyyan, from their homes in the al-Far’a refugee camp, south of the city.

In Salfit, in central West Bank, the soldiers abducted a young woman, identified as Tha’era Mousa Qassoul, 24, at the entrance of the nearby Kifl Hares town, while she was on her way to work.

In Ramallah, in central West Bank, the soldiers abducted Mohammad Fawzi Shalabi, from his home in the al-Mazra’a ash-Sharqiya town, northeast of the city.

It is worth mentioning that the soldiers killed a mentally disabled man, identified as Husam Abdul-Latif Habali, 22, and injured several others, in Tulkarem city, in northern West Bank.