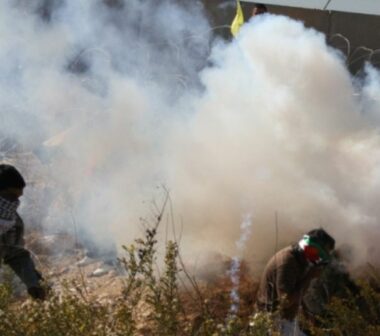 A Palestinian woman who was seven months pregnant suffered a miscarriage last Thursday after Israeli forces repeatedly fired tear gas toward her home in Mughayir village, east of Ramallah,

Areej Abu Alya, 37, was hospitalized for several days with severe bleeding following the firing of over a hundred tear gas canisters by the Israeli military in front of and around her home over the course of the previous week.

Her home is located in an area scheduled by Israeli authorities for forced takeover, and Palestinian residents protest the Israeli military’s actions on an almost-daily basis.

According to Iyad Abu Alya, Areej’s husband, “We live in a very dangerous area. Tear gas canisters are scattered around the house and inside, and I can no longer collect them immediately to throw them out of our children’s reach.”

The couple have eight children, and according to Iyad, the tear gas penetrates inside their home through the windows while they are sleeping almost every night. Sometimes, he has to bundle his wife and children into their truck and get out of town until the tear gas subsides.

Last Thursday morning, in the early morning hours, the Israeli military invaded the village and were confronted by local youth who threw stones to try to repel the soldiers from their village. The military fired tear gas canisters, most of which fell near the Abu Alya house, which led to Areej inhaling a large amount of tear gas and being unable to breathe.

Iyad rushed his wife to the Palestine Medical Complex, and there her condition worsened, so doctors had to transfer her to the operating room when her fetus’s pulse was no longer detected.

Iyad told reporters, “I have to take my children to the doctor on a weekly basis due to the severe symptoms they suffer as a result of inhaling tear gas. They suffer from heartburn, which causes continuous vomiting and chest pains. It seems that the gas released by the occupation is a new and toxic type.”