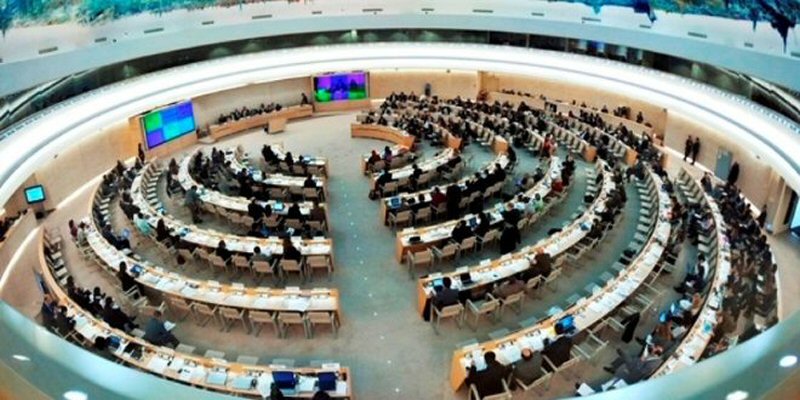 Geneva (QNN) – Kuwait appealed to the UN Human Rights Council, last week, to activate legal mechanisms to guarantee accountability of the Israeli occupation for continued violations of the Palestinians’ rights and to prevent it from impunity.

In his speech to the 46th session of the UN Human Rights Council (HRC) held from February 22 to March 23, Kuwait’s permanent representative to the UN, Ambassador Jamal Al-Ghunaim said that Kuwait condemns all flagrant violations of international human rights’ laws committed by Israel, the occupying force, against the unarmed Palestinian people.

He said Kuwait calls on the international community to shoulder its responsibilities so as to guarantee respect for the principles and provisions of international human rights law and international humanitarian law that should be applicable to the Occupied Palestinian Territory, including East Jerusalem.

He pointed to seriousness and gravity of the unremitting violations committed by the occupying force, Israel, against the Palestinian people, many of which mounting to war crimes and crimes against humanity.

This requires continued discussion of the deterioration of the human rights’ situation in the occupied Arab territories within the framework of Article 7 of the UN Declaration of Human Rights, he pointed out.

Kuwait voiced regret that the international community keeps silent before Israel’s indifference towards international law and the UN resolutions, at a time when all countries are required to take deterrent measures against the Israeli occupation in order to stop committing its crimes against unarmed Palestinian civilians.

Ambassador Al-Ghunaim reiterated that Israel continues to practice the policy of racial discrimination and ethnic cleansing against Palestinians, topped with their basic right to life and self-determination, whereas the occupation should end with establishing an independent and sovereign Palestinian state with East Jerusalem as its capital, in line with the UN relevant decisions.

The continuation of Judaizing Jerusalem and changing its historical and religious status, as well as destroying public and private properties and excavations under Al-Aqsa Mosque and other religious places are clear and explicit violations of the Fourth Geneva Convention, he made clear. Such acts undermine international efforts aiming to put an end to the occupation and establish a sovereign Palestinian state, he underlined.

Kuwait, he carried on, expresses concern over the Israeli plans aiming to destroy further houses and residential areas in Jerusalem to carry out settlement projects and change demographic status of the city, in addition to strategies to impose temporal and spatial division of Al-Aqsa Mosque that may lead to new waves of conflict and violence.

He said that Kuwait condemns Israeli repeated measures impeding the arrival of coronavirus vaccines provided by the international community to the Occupied Palestinian Territories and the besieged Gaza Strip.

He noted that the matter runs counter to humanitarian laws and norms, and is a flagrant violation of the simplest human rights principles and responsibility upon the current occupying authority, in line with the relevant international law provisions.

The Ambassador reiterated that Kuwait supports the Palestinians’ fair cause, which is one the basic constants of Kuwait’s foreign policy.

He affirmed the Palestinian cause will remain on Kuwait’s top priorities and Kuwait’s backing will continue until ending the Israeli occupation of the Arab territories and establishing an independent Palestinian state on its territories with East Jerusalem as its capital, in line with the two-state solution, the Arab peace initiative and international legitimacy’s resolutions.