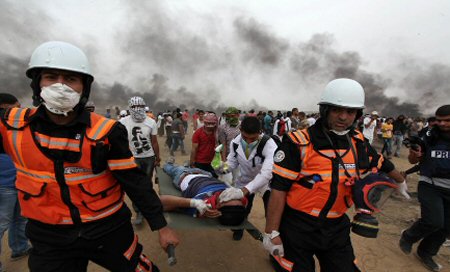 Head of International Committee of Red Cross (ICRC) sub-delegation in Gaza, Gilan Devorn, has called on Israeli occupation authorities to respect and ensure the unimpeded functioning of medical services for the wounded and sick.

In a statement on Saturday, Devorn expressed his deep regret over an incident in which a medic from the Red Crescent was wounded by Israeli fire while performing his work in the north of the Gaza Strip.

“With the increasing violence, ensuring that medical services for wounded and sick are unimpeded is extremely important. The PRCS has worked courageously and tirelessly to fulfill its humanitarian mission,” he added.

As part of its work, the ICRC acts as a neutral intermediary and [is] keen to conduct a public dialogue with all relevant authorities and security forces, in order to minimize the impact of the current events on civilians, and to maintain a humanitarian space that enables medical personnel to work safely.”