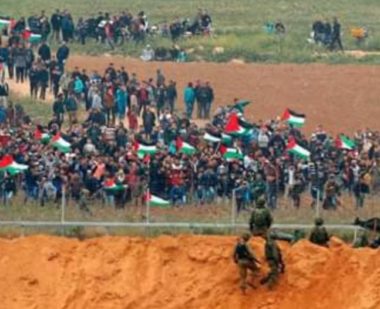 A statement published by Israeli human rights group B’Tselem on Wednesday accused Israeli officials of openly admitting that they knew their soldiers were killing people that, “even in the eyes of the state, had no reason to be gunned down.”

“No one bothered to change the orders, and the army continued to operate in a manner of trial and error, as if these were not real people who might be killed or wounded… People whose lives and the lives of their families have been destroyed forever,” said B’Tselem.

The Israeli military has long argued that the protests at the fence should be seen in the context of a long-running armed conflict with Hamas, and thus open-fire regulations are subject to the rules of armed conflict, which provide greater leeway for the use of lethal force.

Human rights groups and many others rejected that logic, arguing that treating civilian protests as armed conflict is illegal. At the height of the protests, as the casualties mounted, the prosecutor of the International Criminal Court published a warning that “violence against civilians — in a situation such as one prevailing in Gaza” could constitute war crimes. Anyone who orders, encourages or carries out that violence, she said, “is liable to prosecution before the Court.”

Despite the international criticism and calls for an independent investigation into the killing of unarmed demonstrators in Gaza, Israeli authorities doubled down on orders to open fire on unarmed protesters.

Last May, Israel’s High Court of Justice rejected two petitions from Israeli human rights groups demanding an end to the killing of unarmed civilians at the fence. The Israeli army, in that case, argued that live fire could be used in response to “violent disturbances that pose real and imminent danger to IDF forces or to Israeli civilians,” and that the rules of engagement allow for “accurate shooting at the legs of a key agitator or instigator in order to remove the danger of a violent riot.”

The state also added that “there is a systematic process of drawing operational lessons and implementing them,” that the army had sharpened its open-fire procedures in order to “further reduce the casualties to the extent possible,” and that cases in which Palestinians were killed were referred to the General Staff for further investigation.