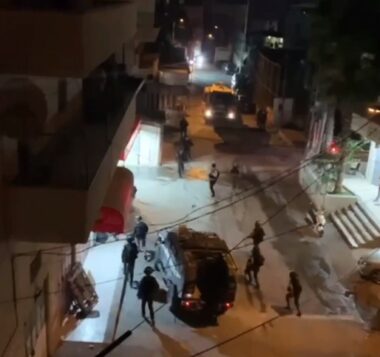 Israeli soldiers abducted, on Tuesday evening, five Palestinians, including two who were kidnapped by undercover soldiers, and fired many gas bombs and concussion grenades at Palestinian protesters in occupied Jerusalem.

The Wadi Hilweh Information Center in Silwan (Silwanic) has reported that the soldiers attacked many young Palestinian men, and interrogated them while inspecting their Id cards, before abducting three, near Bab al-‘Amoud, in Jerusalem.

In addition, dozens of soldiers invaded the al-Isawiya village, in Jerusalem, especially the Obeid neighborhood, leading to massive protesters.

The soldiers fired a barrage of gas bombs, concussion grenades, and rubber-coated steel bullets at the protesters, and sprayed many streets and homes with wastewater mixed with chemicals.