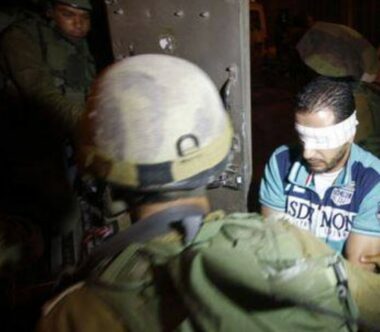 Israeli soldiers abducted, on Sunday at dawn, four Palestinians from Hebron city, in the southern part of the occupied West Bank.

Media sources said many army jeeps invaded a few neighborhoods in the city before the soldiers stormed and violently searched homes.

They added that, during the invasion of homes, the soldiers abducted Amir Abu Zeina, Essam Natsha, Younes Abu Ermeila, and Mohammad al-Qawasmi, before moving them to a nearby interrogation and detention facility.

The soldiers also installed roadblocks in several areas in and around Hebron, before stopping and searching many cars, and interrogated the Palestinians while inspecting their ID cards.

On Saturday, the soldiers abducted three young Palestinian men from Jerusalem, Ramallah, and Hebron, in the occupied West Bank, during invasions targeting many communities in the occupied territory.