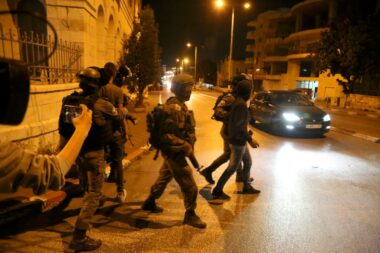 Israeli soldiers abducted, on Monday at night, two Palestinians, and assaulted one man, causing various injuries, near the northern entrance of Bethlehem city, south of occupied Jerusalem, in the West Bank.

Media sources said protests took place at the northern entrance of the city before the soldiers fired gas bombs and concussion grenades.

They added that the soldiers chased many Palestinians and abducted two young men and took them to a nearby military base.

In addition, the soldiers assaulted a man, 47 years of age, causing various injuries, before Palestinian medics rushed him to a local hospital.