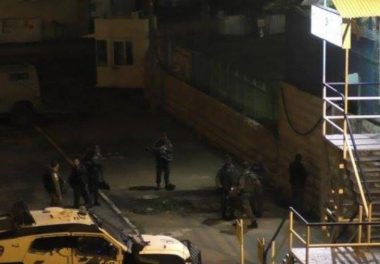 Israeli soldiers abducted, on Wednesday morning, two Palestinians in the southern West Bank governorate of Hebron, while Israeli colonists assaulted and injured a child in Hebron city. The latest abductions bring the number of abduction Palestinians since dawn hours, in the West Bank, to 28.

Furthermore, the soldiers abducted a Palestinian at a military roadblock, in Hebron’s Old City, and took him to an unknown destination.

In related news, extremist Israeli colonists attacked a Palestinian child, identified as Amin Ibrahim Ramadan, only 9 years of age, in the Shallala neighborhood, in the center of Hebron city, causing various cuts and bruises.

The soldiers also invaded the home of Qotada al-Qawasmi, violently searched it, and illegally confiscated cash.

In addition, the soldiers invaded and searched homes in Yatta town, south of Hebron, and interrogated many Palestinians.

On Wednesday at dawn, the soldiers conducted massive invasions and violent searches of homes, in the West Bank governorates of Jenin, Bethlehem and Jerusalem, and abducted at least 26, including children.