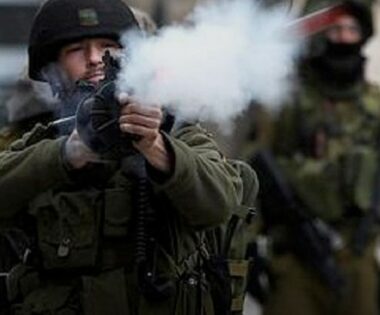 The soldiers also invaded the main entrance area of Al-Arroub, leading to protests before firing many gas bombs, concussion grenades, and rubber-coated steel bullets at the entrance of Kadoorie, causing scores of Palestinian to suffer the effects of tear gas inhalation.

The army surrounded the college campus and closed the streets, preventing the Palestinians from entering or leaving the area.

Furthermore, the soldiers invaded Al-Khader town, south of Bethlehem, especially the At-Tall area in the Old City, leading to protests before the army fired many gas bombs and concussion grenades at the protesters and surrounding homes, causing several injuries.

In Nablus, in the northern West Bank, the soldiers invaded Osarin village, south of the city, and attacked Palestinians who protested the invasion.

Medical sources said the soldiers shot a young man with a gas bomb in the face before he was rushed to a hospital in Nablus and caused at least five others to suffer the effects of tear gas inhalation.

In the occupied capital, Jerusalem, the soldiers invaded the Shu’fat refugee camp northeast of the city and abducted a young man.

The soldiers also invaded Silwan town, south of the Al-Aqsa Mosque in Jerusalem, and removed Palestinian flags from electricity poles in various neighborhoods.

In Ramallah, in the central West Bank, the soldiers closed the northern entrance of Al-Biereh city and the main entrance of Silwad town, stopped and searched dozens of cars, and interrogated many Palestinians while inspecting their ID cards.

On Monday dawn, Israeli soldiers abducted eleven Palestinians from their homes in Hebron and Ramallah.