Soldiers Assault A Palestinian Before Abducting Him In Jenin 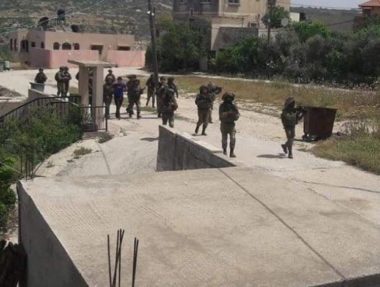 Israeli soldiers assaulted, on Monday at dawn, a young Palestinian man in Misilyah town, south of the northern West Bank city of Jenin, and abducted him after searching and ransacking his home.

They added that the soldiers assaulted the Palestinian in his own home before abducting him, and took him to an unknown destination.

In addition, the soldiers invaded Qabatia town, south of Jenin, and drove in various streets and neighborhoods before withdrawing.

In related news, the soldiers invaded Hebron city, and nearby towns of Beit Ummar and Yatta, in addition to the al-‘Arroub refugee camp, in southern West Bank, searched and ransacked many homes and abducted four Palestinians, in addition to wounding several others.