Soldiers Assault A Palestinian Near His Home In Hebron 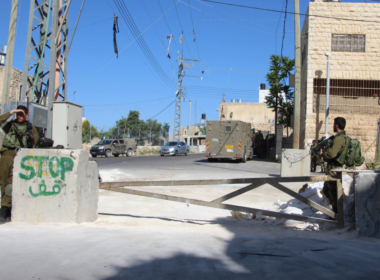 Israeli soldiers assaulted,  on Tuesday evening, a young Palestinian man at a military roadblock near his home in Hebron city, in the southern part of the occupied West Bank, causing cuts and bruises, and detained him for several hours.

Media sources in Hebron said the soldiers assaulted Amin Nafeth Salayma, 25, while trying to reach his home in Jaber neighborhood.

They added that the soldiers assaulted Salayma at the permanent military roadblock leading to his home.

His mother, a journalist identified as Ikram Tamimi, said the soldiers took her son to an unknown destination where they repeatedly assaulted him, and released him a few hours later.

She added that the soldiers never told Amin the reasons for abducting and assaulting him, and stated that her son has lacerations and bruises all over his body.