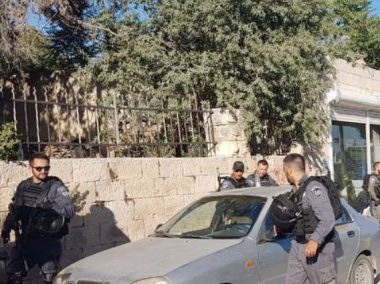 Israeli soldiers attacked, on Thursday at night, three young Palestinian men, after stopping a car in Silwan town, south of the Al-Aqsa Mosque, in occupied Jerusalem, and continuously assaulted them, causing various cuts and bruises, before abducting one of them.

Media sources in Silwan said the soldiers stopped a car transporting three young men, in the al-Ein neighborhood in Silwan, and forced them out of the vehicle, before thoroughly searching them while inspecting their ID cards.

The sources added that the soldiers then assaulted the three Palestinians, by kicking and beating them up, in addition to striking them with their weapons, and abducted one of them, identified as Salah ‘Oweida.

The soldiers also hurled concussion grenades at many Palestinians, and fired rubber-coated steel bullets at them, after they gathered in the area in an attempt to stop the soldiers, and secure ‘Oweida’s release.