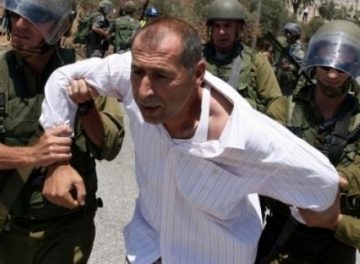 Palestinian medical sources have reported that a young man was injured, on Sunday evening, after Israeli soldiers assaulted him in Beit Ummar town, north of Hebron, in the southern part of the occupied West Bank.

The sources said the young man has been identified as Ramzi Nadi Ekhlayyel, 22, from Beit Ummar, and that he was moved to a hospital for treatment.

Ekhlayyel was assaulted in the Central Market in Beit Ummar; the soldiers repeatedly kicked and beat him, before they cuffed and blindfolded him, and assaulted him again in the military jeep.

The army wanted to abduct the Palestinian despite his injuries, but dozens of residents, including his father and Beit Ummar Mayor, eventually managed to secure his release.

The soldiers fired many live rounds into the air in an attempt to force the Palestinians away.