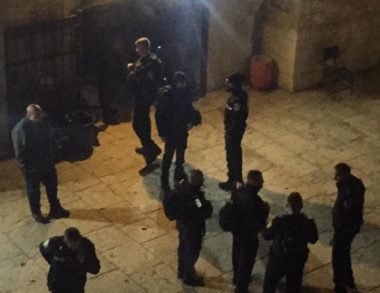 Israeli soldiers attacked, on Tuesday evening, many Palestinian worshipers in the Al-Aqsa Mosque Compound, in occupied East Jerusalem, and abducted six Palestinians, including one woman.

Eyewitnesses said the soldiers assaulted dozens of worshipers near Bab ar-Rahma, one of the gates of the Al-Aqsa Mosque, before abducting the six Palestinians.

They added that the soldiers attacked many Palestinians near Bab ar-Rahma while they were trying to enter Al-Aqsa for evening prayers.

The Islamic Waqf and Endowment Department issued a statement condemning the attack, which is one of the dozens of similar violations against the Al-Aqsa Mosque in the occupied city.

It added that Israel is trying to close Bab ar-Rahma Mosque, yet again, to allow extremist Israeli colonialist groups to occupy it.

It is worth mentioning that Bab ar-Rahma Mosque was reopened on February 16th, 2019, after dozens of Palestinians protested its closure under Israeli orders for sixteen consecutive years, and managed to reopen it despite continued invasions and attempts to prevent the Muslim worshipers from entering it.

In related news, the soldiers invaded the al-‘Isawiya town, in Jerusalem, and abducted a young man.