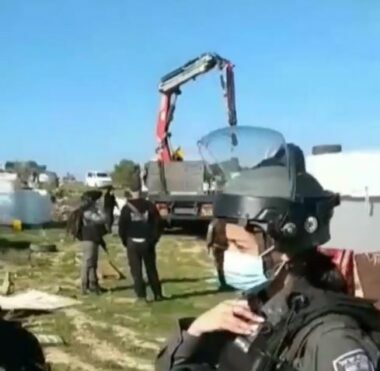 Israeli soldiers demolished, Monday, a home in Beit Sahour, east of Bethlehem, south of the occupied Palestinian capital, Jerusalem, in the West Bank.

The Israeli army claims the home, owned by Palestinians from Ja’abis family, was built without a permit from the so-called “Civil Administration Office,” the administrative branch of the illegal occupation.

It is worth mentioning that Osh Ghrab, approximately 100 Dunams (24.71 Acres), is subject to constant invasions and violation by the soldiers and the illegal colonialist settlers.

In related news, the soldiers demolished a tent, in addition to confiscating agricultural equipment, generators and doors, in the Masafer Yatta area, south of Hebron, in the southern part of the occupied West Bank.

It is worth mentioning that Israel has demolished 197 Palestinian homes during the year 2020, among them 77 homes that the owners had to self-demolish their properties to avoid the excessively high fines and fees, in addition to the demolition costs if the city uses its workers and equipment.

According to data compiled by the Israeli Committee Against House Demolitions (ICAHD), Israel demolished a total of 865 structures, (including homes, rooms, and other facilities), displacing 1014 Palestinians across the West Bank, including Jerusalem.

The illegal Israeli policy of home demolitions and collective punishment has led to the destruction of more than 120.000 Palestinian homes since Israel was established in the historic land of Palestine in the year 1948.