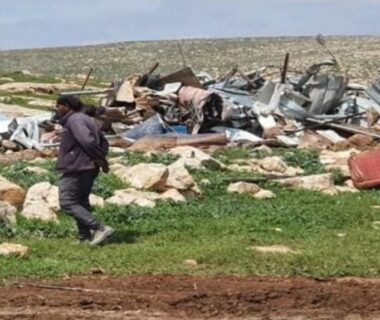 Media sources said the Palestinians did not receive demolition orders; therefore, they had no chance of even trying to appeal the destruction of their dwellings.

They added that the demolished rendered homeless at least twenty-five Palestinians, including several children.

During the invasion, the soldiers destroyed several solar power units used by the families, especially since the area has no infrastructure due to Israel’s illegal policies against the Palestinians.

Many families in the area face the same threat of demolition and displacement in al-Mo’arrajat, especially since illegal Israeli colonizers plan to construct eight colonialist outposts on stolen Palestinian lands. The colonizers plan to build barns and raise livestock after forcibly displacing the indigenous Palestinians.