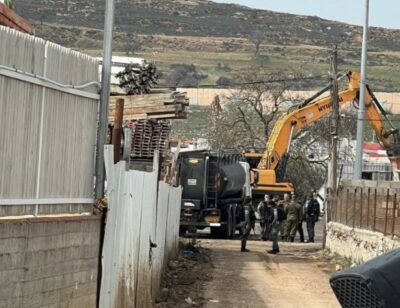 Several army vehicles, including bulldozers, invaded the Wad Ad-Dam area in Beit Hanina before demolishing a commercial structure owned by Palestinians from the local al-Qassas family.

The Israeli army claims the structure was built without a permit from the City Council of occupied Jerusalem.

In addition, the soldiers invaded Douma town, south of Nablus, and demolished two agricultural rooms, one of them owned by Abdullah Salawda. The name of the second structure’s owner was unknown at the time of this report.

While Israel continues to build and expand its illegal colonies, while continuing to deny Palestinian communities, and towns, in occupied Jerusalem, and various areas in the occupied West Bank, the right to build homes and property, under various allegations meant to prevent the expansion of Palestinian towns and neighborhoods.