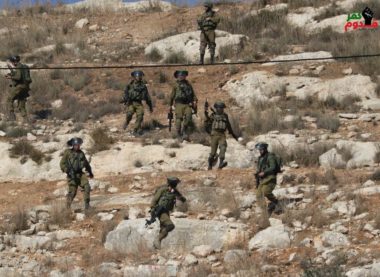 Israeli soldiers attacked, Friday, the weekly procession against the illegal Annexation Wall and colonies in Kufur Qaddoum town, east of the northern West Bank city of Qalqilia, causing dozens to suffer the effects of teargas inhalation.

This week’s procession also condemned the illegal policies of the United States, especially the Trump Administration’s recognition of the Israeli colonies, built in the occupied West Bank, including East Jerusalem, in direct violation of International Law, the Fourth Geneva Convention and various United Nations resolutions.

The Popular Committee in Kufur Qaddoum said the soldiers resorted to the excessive use of force against the protesters and fired a barrage of gas bombs, concussion grenades, rubber-coated steel bullets and rounds of live ammunition.

It added that dozens of Palestinians, including many children, suffered the severe effects of teargas inhalation, especially after the soldiers fired gas bombs, not only at the nonviolent procession, but also at many surrounding homes.

The soldiers also tried to ambush the protesters, especially near Omar Bin al-Khattab Mosque, but their hideout was uncovered, and were unable to abduct any protester, while many youngsters started throwing stones at the army.