Soldiers Injure Many Palestinians, Including Schoolchildren, Abduct A Child, in Hebron 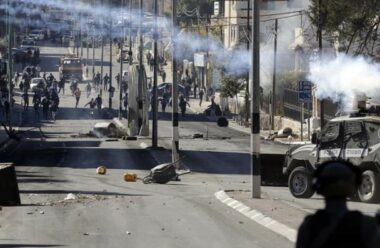 Israeli soldiers injured, Tuesday, dozens of Palestinians, including schoolchildren, and abducted one child, in Hebron city and the nearby Sa’ir town, in the southern part of the occupied West Bank.

Media sources in Hebron city said the soldiers attacked many schoolchildren at the Abu ar-Reesh military roadblock to the west of the Ibrahimi Mosque, leading to protests.

They added that the soldiers fired gas bombs and concussion grenades at the schoolchildren, causing dozens to suffer the effects of tear gas inhalation.

In addition, the soldiers attacked dozens of nonviolent protesters, who marched in solidarity with the detainees in Israeli prisons, in Sa’ir town, northeast of Hebron.

The Palestinians were carrying Palestinian flags, posters of the detainees, and chanted for the liberation of Palestine and the release of all political prisoners.

Eyewitnesses said the soldiers fired many rubber-coated steel bullets, gas bombs, and concussion grenades at the protesters near bypass road #60, west of Sa’ir.

Medical sources said the soldiers shot two Palestinians with gas bombs, and two with rubber-coated steel bullets, in addition to causing dozens to suffer the effects of tear gas inhalation.

Furthermore, the soldiers abducted a child, identified as Ghada Kamel Kawazba, 15, and took her to a nearby military base.